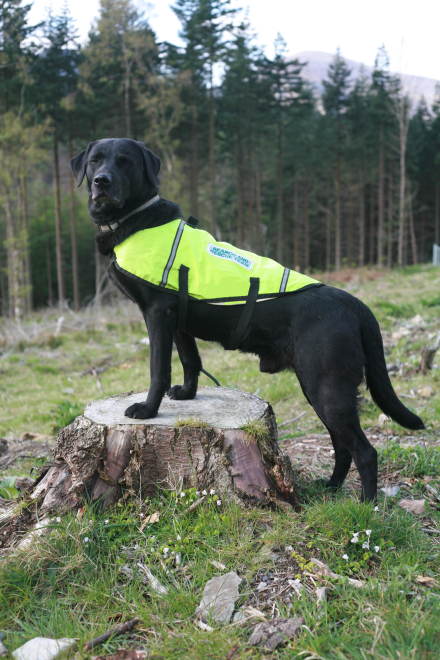 With great sadness, I have to inform all his friends, that poor old Charco has passed away. He died this morning at around 0130 when Aiden O’Hare, a caring and very professional vet from Castle Veterinary Group, Castlewellan, put an end to his suffering. Charco had suffered a number of mini strokes recently but, as always, refused to be beaten, But yesterday he experienced one too many and the poor wee fella was finished. Our hearts are broken in tiny pieces.

For those who didn’t know him, Charco was a collapsed structure search dog who was seconded to the NI Fire and Rescue service, for whom he carried out a number of searches of dangerous building collapses. He was also a member of British International Rescue and search Dogs and a search dog with SARDA (Ireland North). As a search dog,  Charco assisted at two major earthquakes, one in Algeria and the other, a far bigger one, in Kashmir and in both places he located buried victims. Tragically, he then had to endure two periods in quarantine, which were terrible for him and for us. But so many school children had been buried alive in Kashmir, and he was the best there was and that’s why I agreed to take him on the second international disaster response.

Charco was such a clever dog that I had dual trained him to search for explosives and in that role he worked in London at Canary Wharf, The O2 and Lords Cricket Ground. One command switched him from a search and rescue dog to a bomb dog and in both roles he was a master.

He never fought with another dog and was everybody’s friend, especially small children and we all loved him so dearly and will miss him so very much.

Anyone who has read my book, ‘Search Dogs and Me’, will be familiar with the picture of Charco on the cover page and with the story of him carrying the toilet roll which allowed us to pull a fast one on the team medic who accompanied us to Kashmir. He made us all laugh then, but now………….

‘If tears could build a stairway,
and memories a lane.
I would walk right up to Heaven
and bring you back again.

Since you’ll never be forgotten,
I pledge to you today~
A hollowed place within my heart
is where you’ll always stay.’