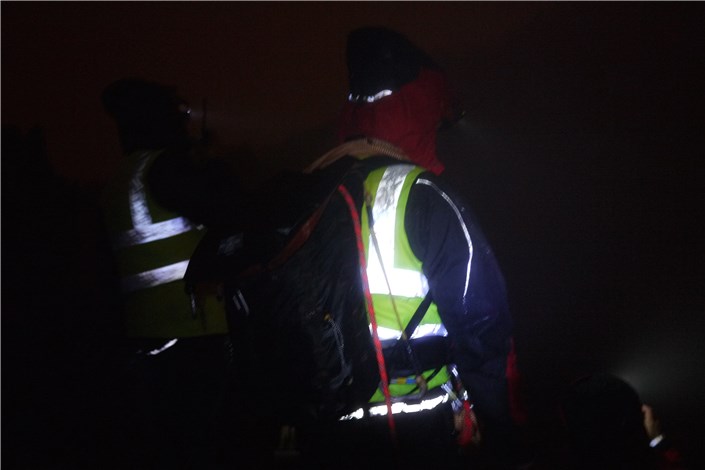 Last night as wind speeds in Capel Curig were recorded at 83mph the Llanberis Mountain Rescue team were traversing Crib Y Ddysgyl (the continuation of Crib Goch) searching for a missing 19 year old walker who had called for help, lost, very very cold and beginning to slur his words due to hypothermia.

The team were called late in the afternoon as the light began to fade on the snow covered peaks. The 19 year old had climbed Snowdon on his own via the Llanberis Path and then become misplaced in descent, following an extremely narrow ridge that is not a great place to be in high winds. He became trapped on steep crags and made the call for help.

Llanberis Mountain Rescue Team (LLMRT) covers Snowdon and last year received 184 calls for help. This was the second call of 2015, the first call of the year was also to rescue people stuck on Crib Goch in the snow.

What made last nights call out exceptional was the weather that the team of volunteers faced. Mountain experts council against traversing narrow ridges when wind speeds are greater than 35mph, last nights gusts on the mountain were at least 80-90 mph and could easily have been more. Combine this with snow on the ground and the potential consequences for the volunteer team members of getting blown over were very high.

The first search party to reach the ridge experienced winds so severe that a member of the party was blown off their feet and forced to retreat to safer ground.

With darkness falling and the increasing possibility of a large scale search the team also requested the assistance of RAF Valley Mountain Rescue team. However, the weather was now deteriorating to such an extent that the team were forced to consider all possibilities as the coordinator responsible for the incident explained:

“The conditions reported by the first party were so extreme that we had to seriously consider whether we could justify deploying more people to the area. On the one hand we had a young walker in jeans, plimsolls and a leather jacket rapidly succumbing to hypothermia, on the other a responsibility not to put team members’ lives in such serious danger. There was a real possibility that we might have been forced to leave him there on the mountain.”

The initial search area was sizeable and included steep and technical terrain. Marred by poor visibility it was through sheer luck that a very short break in the wind allowed the last two members of the search party to make voice contact with the casualty as the group passed by.

A member of the search party who was one of the first to reach the casualty commented:
“I’m certain that if we hadn’t found him when we did we would have been recovering his body the next morning. Those of us at the front of the group had passed within 100 metres of him and were on our way to search further up the mountain. It was pure fluke that the wind subsided when it did. He was in a difficult to reach location and with conditions due to get worse a detailed search of that area would have been impossible. He is very lucky to be alive.”

Because of the his precarious position at the top of a gully where a number of fatalities have previously occurred the team used ropes to recover him to safety. He was then assisted down to rescue team vehicles and taken to the rescue team’s base in Nant Peris for a bit of friendly advice.

The rescue sums up the commitment of Mountain Rescue team members across the UK. Men and women who put down their daily lives and head up a mountain in weather that no-one else would be out in, prepared to risk their own lives to save another, without pay, without expenses and many, many times a year.

LLMRT has a dual remit of rescue and education in mountain safety and tries to draw lessons learnt from rescues like this one, without attributing blame or casting judgement. This rescue highlights the importance of good navigation skills in the mountains, always carry a map and compass and know how to use them. It also highlights the need for appropriate clothing to stay warm and dry in some pretty extreme weather. For much of the winter the mountains of Snowdonia have snow and ice on them, it can be there one day and gone the next,, it is important to check a mountain weather forecast to establish if there is snow and what the wind speeds are. When the mountains are covered in snow and ice crampons and an ice axe become necessary for progress. You can get more safety advice and links to further information from the team website.

The Llanberis Mountain Rescue Team is a fully voluntary organisation which responds to mountain incidents for those in need on Snowdon and the surrounding mountains. The team is on-call 24 hours a day, 365 days a year and relies on donations from members of the public to carry out this essential life-saving rescue service. You can donate on the team website here: http://www.llanberismountainrescue.co.uk