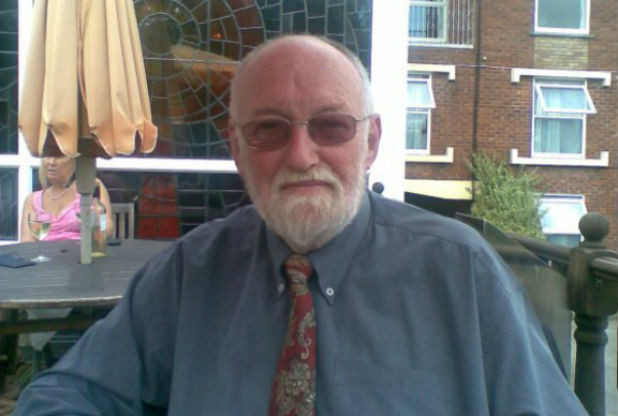 A RESCUE dog called Merlin saved the life of a Llanelli pensioner who had fallen down a 10 foot ditch after he disappeared from hospital 24 hours earlier — sparking a massive manhunt.

The Star’s story of his disappearance and hourly updates on our Facebook page and website attracted 100,000 views.

Pembrey circuit marshal, Ken, 72, who suffers from early onset dementia, walked out of the hospital at 7.45pm and was gone overnight.

He was eventually tracked down in Llanarthne, nine miles away from the hospital almost 24 hours from where he had disappeared by the Brecon Mountain Rescue Team and their search dog Merlin.

Mark Jones, Deputy Team Leader of Brecon Mountain Rescue said there could so easily have been a different outcome.

“We were very conscious he had been on his feet for about 12 hours and that he could soon run out of fuel and his speed would slow,” he said.

“A second sighting was then reported in Llanarthne.

“It was early evening when search dogs found him in a 10ft ditch.

“He had become extremely disorientated and fallen.

“He had been staggering and he had fallen down the ditch.

“He had fallen through some saplings and they had just sprung back into place and hidden him from view, so we couldn’t actually see him.

“If it hadn’t been for the search dogs sniffing him out we might have had quite a different outcome.

“If it wasn’t for them he might still be there.”

Pembrey Marshals organised a collection for the Mountain Rescue Team, with drivers from the Welsh Sports and Saloon Car Championship and the marshals and officials raising around £500 between them.

Senior Marshal Ernie Preece said: “Without the efforts of the rescue team and Merlin, Ken would have died, so we’re all so grateful to them for their efforts.

“They are all volunteers like us and we want to give them as much support as we can.”

A Dyfed-Powys Police spokesman said: “Police can confirm that Ivor Evans, missing in the Carmarthen area, has been found and taken to hospital for treatment. He was found in the Llanarthne area just before 7pm on October 1. Police would like to thank everyone who provided information and help in the search.”

Hywel Dda Health Board has promised a full investigation into how Mr Evans was able to leave the hospital without being noticed.

“Under the University Health Board’s normal policies and procedures, all incidents of this type are always fully investigated and so it would be inappropriate to comment further at this time,” said a health board spokesman.

The Brecon Mountain Rescue team are entirely voluntary and rely on donations. It costs £40,000 a year to run. For more details on their work visit: www.breconmrt.co.uk