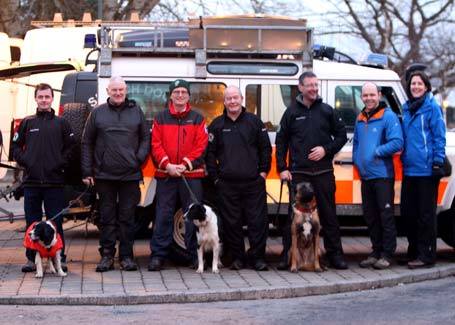 Two searches of the River Erne for a missing teenager, have been conducted by SARDA IN over two days at the request of the PSNI. The first search was on 1 February by DVS Fern, and a follow up was conducted on Sunday 8 February. Three DVS Dogs, Fern, Quincy and Sasha were deployed on Sunday, the last two having travelled over from England courtesy of Irish sea ferries last Saturday night. They and two other team members were given free accommodation by Robert and Dawn Livingstone at the Sharevillage Ltd, Lisnaskea who were so generous in their welcome and support.

Initially, Quincy and Fern were allocated to the boats whilst Sasha was tasked to search a stretch of bank. At one specific place, Fern indicated whilst soon after from the bank and in the same area, Sasha also indicated. This was followed up by Quincy, who travelled from his own designated search area with his handler to carry out a configured search pattern covering the area where the other two dogs had indicated. Quincy too indicated at the same place, leaving all three handlers to interpret the results and to give any follow up suggestions to search control.

Once the designated areas had been successfully completed, a de-briefing followed and it was decided to carry out a sonar scan of the area over the next two or three days to see if it could add anything to the results. To date, these results are still awaited and the search is ongoing.

SARDA IN would wish to record their deep sympathy to the family of the missing teenager. We would also like to extend our sincere thanks to the generosity of the local people who supplied all the volunteers teams with food and refreshments, not to mention providing fuel for boats and vehicles and making cash donations to the various charities attending.